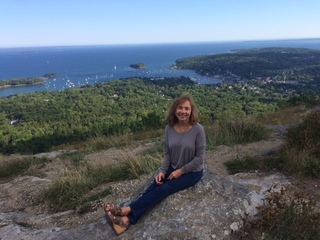 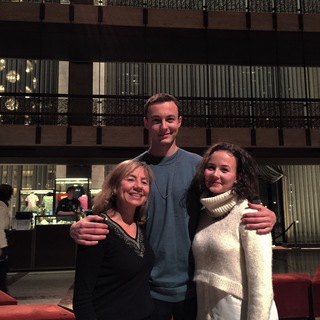 With my children, Anna and Jack, at Lincoln Center in December 2014 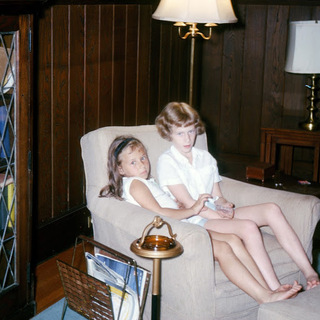 At the age of 9 or 10 (left in photo), with my next-door neighbor, my first best friend, Lois, sharing an armchair in her living room 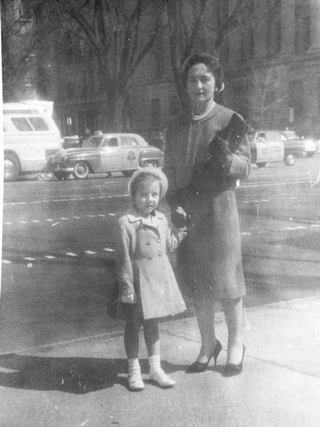 At the age of 5  with my mother in Washington, D.C.

I was born and raised in Montclair, New Jersey, a quick bus ride away from New York City. The city's skyline glistened like Oz from the town's highest points, always beckoning me. By the time I was twenty-four, I had my own tiny apartment on the Upper West Side. Today I still live in the same neighborhood, halfway between Central Park and Riverside Park, in a somewhat-larger apartment, where I brought up my two children.

I grew up in a multi-generational home, in a big old house with my two younger siblings, my parents, my maternal grandparents and five succeeding boxers, each one named Ducat. Both my mother and father had been born and raised in Poland, and were forced to leave at the start of World War II. Polish was the language of the house, where we practiced many Polish traditions and ate many Polish foods.

From the moment I learned to read, I loved nothing more. My strongest childhood memory is being curled up in my favorite chair in the living room with a book, my father lying on the couch next to me, with his book. It seemed only natural to me that I should create what I so love. I can't remember a day of my life when I didn't believe I was, and would always be, a writer.

I studied French, the classics and comparative literature at Brown University and then, more informally, in Aix-en-Provence, France, for a year. I returned home and started a career in publishing. I have been writing, editing and publishing articles, book reviews, magazines and books ever since. In 2008 I became a regular children's book reviewer for Publishers Weekly magazine; I report on children's book events and interview children's book authors and illustrators for the magazine, as well. I've also been lucky enough to be a part of several school communities in New York, working in their libraries and teaching writing, reading and even--briefly, and to my astonishment--second-grade math.

I encourage you to buy my books from your local independent bookseller. To find an independent bookstore,visit IndieBound Bookstore Finder. There are also many sources for purchasing my books online; I suggest ordering directly from the publishers (see below), or from IndieBound or from Barnes & Noble.

The cutting-edge independent publisher of A Girl Called Vincent, Krysia and Becoming Emily